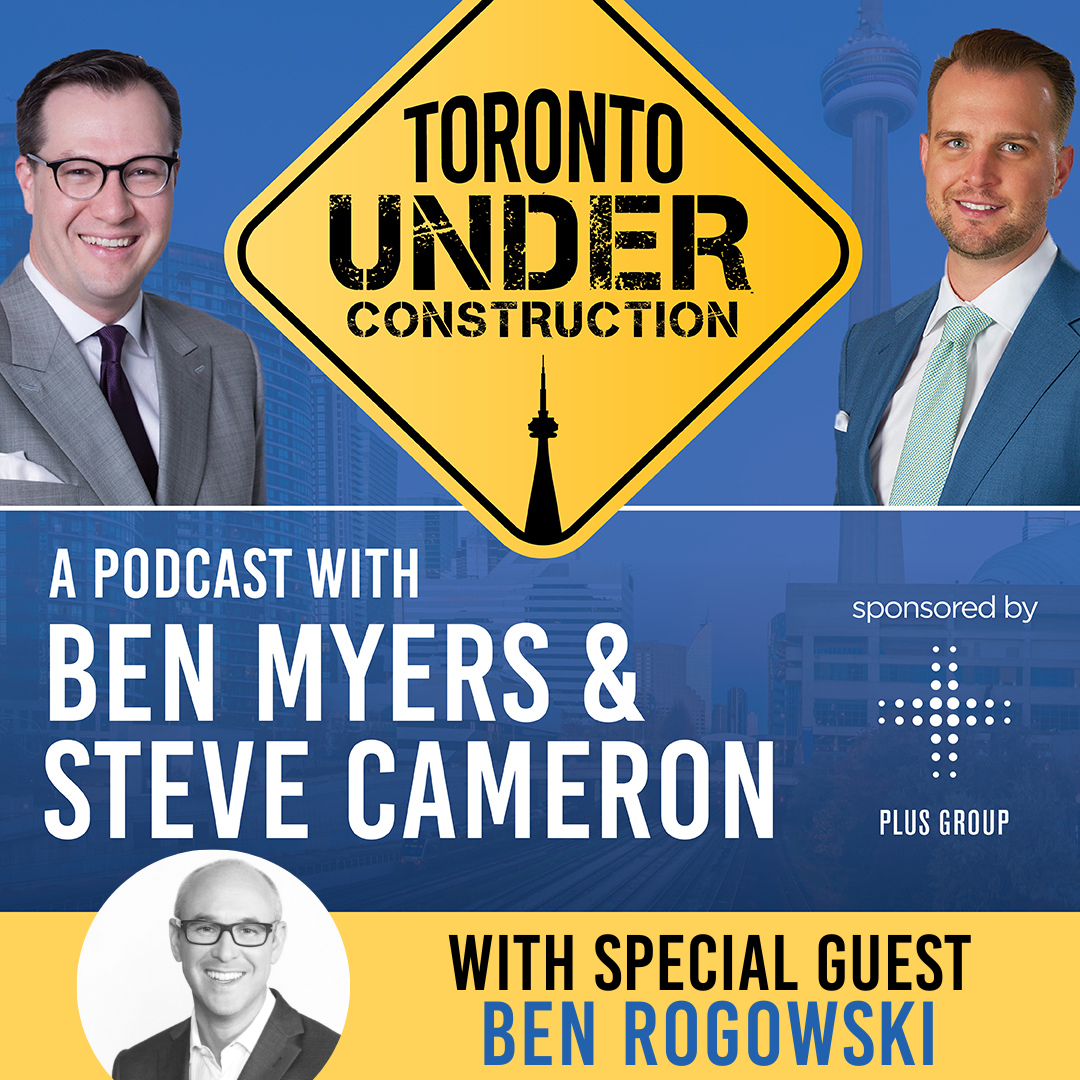 We’re excited to welcome Ben Rogowski from Canderel to episode 38 of the Toronto Under Construction podcast. Ben, Executive VP & COO,  is responsible for the corporate operations, including leading the residential division at Canderel, a Montreal-based Real Estate developer.

The Toronto Under Construction Podcast is Sponsored by The Plus Group

As Steve introduces Ben Rogowski, we learn of his many accolades including leading the acquisition and execution of several landmark residential developments in Toronto. Rogowski shares that he always knew he’d have a career in Real Estate because he looked up to his father, who was a prominent figure in the industry.

Rogowski joined Canderel after taking the interview as a favour to a friend. He’s now been with the company for almost 20 years. One of Rogowski’s first Toronto projects was: DNA (Downtown’s Next Address) in Toronto’s King West neighbourhood. Rogowski jokes that he should have held onto the units he purchased at the pre-construction launch. He goes on to say that if he could’ve done things differently, he would’ve purchased one or two units in each of his projects, paid down the mortgages and in time, held a small portfolio of units that would cover themselves.

Fast forwarding to 2008, the group discusses Canderel’s project, AURA, at Yonge and Gerrard. Due to some zoning issues with the City, the original two tower plans didn’t come to fruition. Instead, the two separate towers became one tower on top of the other with two condo boards, two lobbies, and essentially, two of everything. They go on to discuss the project’s below grade retail space and the wins and struggles that have been ongoing since inception. The retail component of the building that has proven to be successful, originally housed the Marshalls, Bed Bath & Beyond and Madonna’s Hard Candy Fitness. It is now the new home of the downtown IKEA location. The conversation continues to discuss retail size, street appeal and city requirements that don’t end up going as well as everyone hoped; this has an impact on consumers, the City and its streetscape, and the developer.

The guys go on to discuss Canderel’s 2014 project Yonge and College. This project sold out extremely quickly and, in the years following the launch, purchasers made incredible returns on their investments. Was this the best strategy at the time? Does Rogowski wish Canderel had held some units back, to sell them for a higher price later in the pre-sales? You’ll have to listen to the episode to find out!

The discussion switches gears, and the guys discuss office space, with Rogowski shareing his belief that the new Hybrid/Work from Home model is not here to stay. Rogowski is adamant on his team working from the office, but also understands the need to offer some flexibility. The three go on to discuss the impacts of the Work from Home model on talent, especially new talent. There are opportunities that new grads are missing out on by not being in the office. The relationship building and connection is just not there, Rogowski says.

Jumping back into a residential discussion, they look at the market and Rogowski’s latest launches (at St. Clair West and Bayview Village) to discuss unit type split. All three buildings are small buildings (10 – 12 storeys) with small units. But Rogowski notes that they saw a fair amount of interest in purchasers looking to combine units to create larger suites. He goes on to tell us about the Boutique Suite option, which allows a purchaser flexibility to add elements of customization to their floor plan. Though there isn’t total flexibility in floor plans, there is the option to decide how many square feet they want and some options for beds and baths included in that square footage. This project and option is specifically geared to attract end-users.

Another option that is becoming more popular is a Lock-Off suite. Like the concept of adjoining rooms; both units can be accessed from the main corridor, both have a full kitchen, bathrooms, and function completely separately. However, when required, the adjoining door can be opened to allow easy and seamless access between units.

As the episode wraps up, Ben and Steve deliver their rapid-fire questions and answers. They ask Rogowski questions like: “what is a better market going forward: seniors housing or student housing?”, “what side of the business has rising interest rates impacted more: commercial or residential?”, “are we protecting single family homes too much in Toronto?” and “other than Canderel’s work, is there another developer whose work you admire?” and more!

If you want to find Ben Rogowski or learn more about Canderel, Ben says to “come to my office at 1075 Bay St., Suite 400.” You can also call him or email him! He goes on to say Canderel is always looking to hire young, aggressive, bright minds.

Tune in to our latest episode for all this and more!

Interested in being a guest on our podcast? Let us know in the comments.