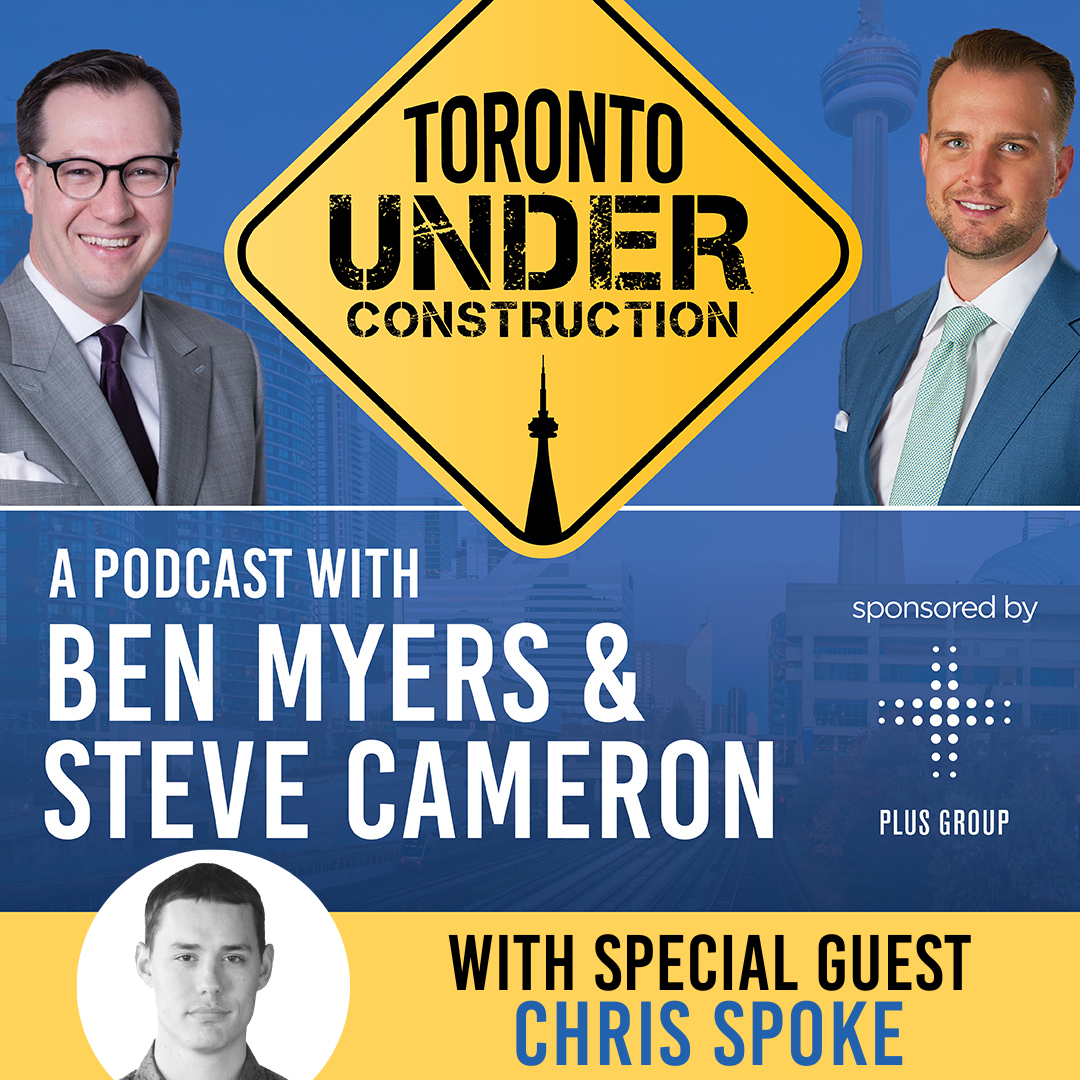 We’re excited to welcome Chris Spoke from BuildStack.co to episode 37 of the Toronto Under
Construction podcast.

Chris owns and manages a digital product studio in Toronto called August,
and he invests with his brothers in renovating and building duplexes, other missing middle built
forms, and now also a mid-rise apartment project. Prior to starting his real estate business, Chris
began paying attention to housing and policy issues in 2012/2013 after reading a book by
Matthew Yglesias called “The Rent Is Too Damn High”. It was the first book he found that took
on the YIMBY argument that for housing to be more affordable, you have to build more housing.
As an economics student, this really resonated with Chris, and he started paying attention to the
[at that time] slowly rising prices and looked for some YIMBY Toronto groups to join. Around
2017 Chris started to host events with his organization Housing Matters and felt the push back on
the YIMBY movement.

YIMBY: Yes In My Back Yard. A YIMBY is pro real estate development and of the opinion that if
we want more people to have homes, we need to build more homes.

NIMBY: Not In My Back Yard. A NIMBY is someone who opposes new development in their
community.

Ben asks Chris about one of his events with Alain Bertaud, a city planner who describes cities
as labour markets, and asks Chris to expand on that. Chris shares that Alain is “a rare urban
planner who’s read an economic textbook, and wrote his own book exploring the idea that cities
are emerging, they can’t be thought of as a big master planned community. You need to create
the conditions for good things to emerge, and let them emerge.” Chris goes on to say that this
means the main reason you would move to a city is for access to many job options, and that
being close to restaurants and nightlife is secondary to being close to where you work. On top of
discussing planning policy, Alain’s book also discusses transportation policy and how it affects
cities. Chris says, Alain’s argument is that once a commute takes about an hour, people start to
look for jobs closer to where they live, which results in the market being smaller. “A smaller
market is one with less specialization in trade, and probably one that is less productive and less
innovative,” says Chris, “so when we talk about planning and transportation policies we need to
start from the first principle of what is a city and why do cities exist?

The episode touches on the rise of construction costs and how we’ve reached our limits
for sprawl and now have to look at infill. Chris says “It’s not just that the construction is more
expensive, but we have these processes that are shaped by NIMBY forces that make it take longer
and cost more than it should.” Steve expands on Chris’ point on transportation and says he thinks this is one of the biggest problems Toronto has. Chris reiterates cities being labour markets and says in this case, bigger is better, because in a bigger market you get more specialization and more options, and that more people [in the city] allow for those options to thrive. Size, however, is contained by commutes,
and Chris says that’s because at a certain point, you stop wanting to work in Toronto due to how
long your commute is. Chris goes on to say that in his opinion “this is an underrated problem
and that housing is relatively easy to solve, we just need to upzone and liberalize land use rules;
but that transportation is more of an engineering problem and people haven’t yet caught up to
what a big problem it is.”

Chris goes on to discuss cross city comparisons. and says North American’s generally, and
Toronto in particular, pay 4-5x more per kilometre of subway than comparable cities in Europe
and East Asia due to a series of policy failures. When we think of changing anything in our cities
it involves a lot of community consultation, which involves a lot of politicization and NIMBY
pushback, and ultimately leads to less efficient ways of doing things.
Dumbfounded, Steve asks, “If we know what to do, why aren’t we doing it?” and Chris says it
comes down to democracy and allowing too many people to have a say in things they aren’t
qualified to have a say about – like counsellors and neighbours when it comes to tunnelling for
subway construction, as opposed to cut and cover, which is more disruptive [to those neighbours]
but cheaper and quicker. Chris does mention that this process is getting better and cites the new
Ontario Line and how Metrolinx is handling the construction by passing new legislation to speed
up transit infrastructure by peeling back community consultation and avenues for community
appeal. But at the end of the day, Chris says the issue is democracy and requiring ‘sign off’ from
the people who use these spaces now and who are impacted now. What this framework doesn’t
account for though, says Chis, is the future people who don’t have a voice [because they don’t
live there yet] and are going to be impacted by today’s decisions. “This system rewards status
quo and rewards incumbents at the costs of new entrants and new generations”.

As the guys discuss NIMBYism more and its impact on Toronto, Chris says you either have to
stop building, or you have to stop listening to these people.

Switching gears, Steve asks Chris about a tweet pinned to the top of his twitter that says “I think
you should be able to live in Toronto and raise a family on one income”. Chris says that he
thinks that should be the overarching political objective of anybody who runs for office in
Toronto and Ontario. He mentions that families and cities are both important, and having
families in cities should be a priority. “I like the kind of energy where you have families in cities
and cities aren’t just places you go after university, before you have kids and move back to the
‘burbs.”

As the guys discuss the bulls and the bears in Toronto, Chris mentions that there has never been
more academic literature on this stuff, and there is as close to a consensus in economics that if you restrict new housing supply through zoning ordinances and other things, housing prices go
up. And if you remove those rules and liberalize you have downward pressure on prices. Steve
asks again, “then why aren’t we doing it?” and Chris suggests that urban planners are not
required to understand economics, and should be. He also mentions that removing these
restrictions will allow a free market, with better feedback loops, as developers are on the pulse of
where the city needs more housing; more so than the urban planners. “We need a housing Zar”,
says Chris. “We have 55 good ideas from the Housing Affordability Taskforce, and the ideas are
really solid and surprisingly bold. Now the province is sitting on this, and it’s up to them to pass
legislation to enact all this stuff, and I think we have the right government to do it.

As the guys continue to discuss this issue, they mention how developers need to have a stronger
voice in the debate [since they have skin in the game], but they don’t really say anything due to
political reasons; they have files being reviewed by city staff and it doesn’t serve them to
disagree with the planners. “Not only do we not have enough developers in the debate, we need
way more!” says Chris. “Political activism cannot be left to the amateurs.” Further to this point,
the guys discuss an article Chris wrote a few years ago called “If you want more housing, you
need to build more luxury condos”. The gist of the article is that there is a demand for luxury
units, and the demand is not being met, which means that these people are dipping into renovated
units in low rise homes and we are seeing a rise of ‘renovictions’ which is forcing lower income
people out and causing more demand for more affordable housing for these people being
displaced.

The discussion moves to some of the developments Chris is currently working on and the guys
discuss zoning, the entitlement and construction processes and whether Chris might entitle a site
and then sell it off. As the episode begins to wrap, Ben asks Chris about Buildstack. Recognizing
a gap in the market, Chris created BuildStack.co which allows new developers to seek out
specific trades for a specific type of build. “It’s basically YellowPages for construction trades,
and designed and consultants, but it’s organized in a way that you can plug in an address and
see the architect, landscape architect, mechanical engineers, all the way through to the
construction trades that contributed to that project.”

Ben and Steve wrap up the episode with their rapid fire question and answer asking Chris things
like should the city of Toronto dictate the suite mix or unit sizes for new development? If a room
has no windows can you call it a bedroom? On a scale of 1 to 10 how worried are you about
resale house pricing correcting? Is inclusionary zoning going to work? Who’s a better chief
planner Gregg Lintern or Jennifer Keesmaat? and more

Want to know more? Tune in to our latest episode to find out!