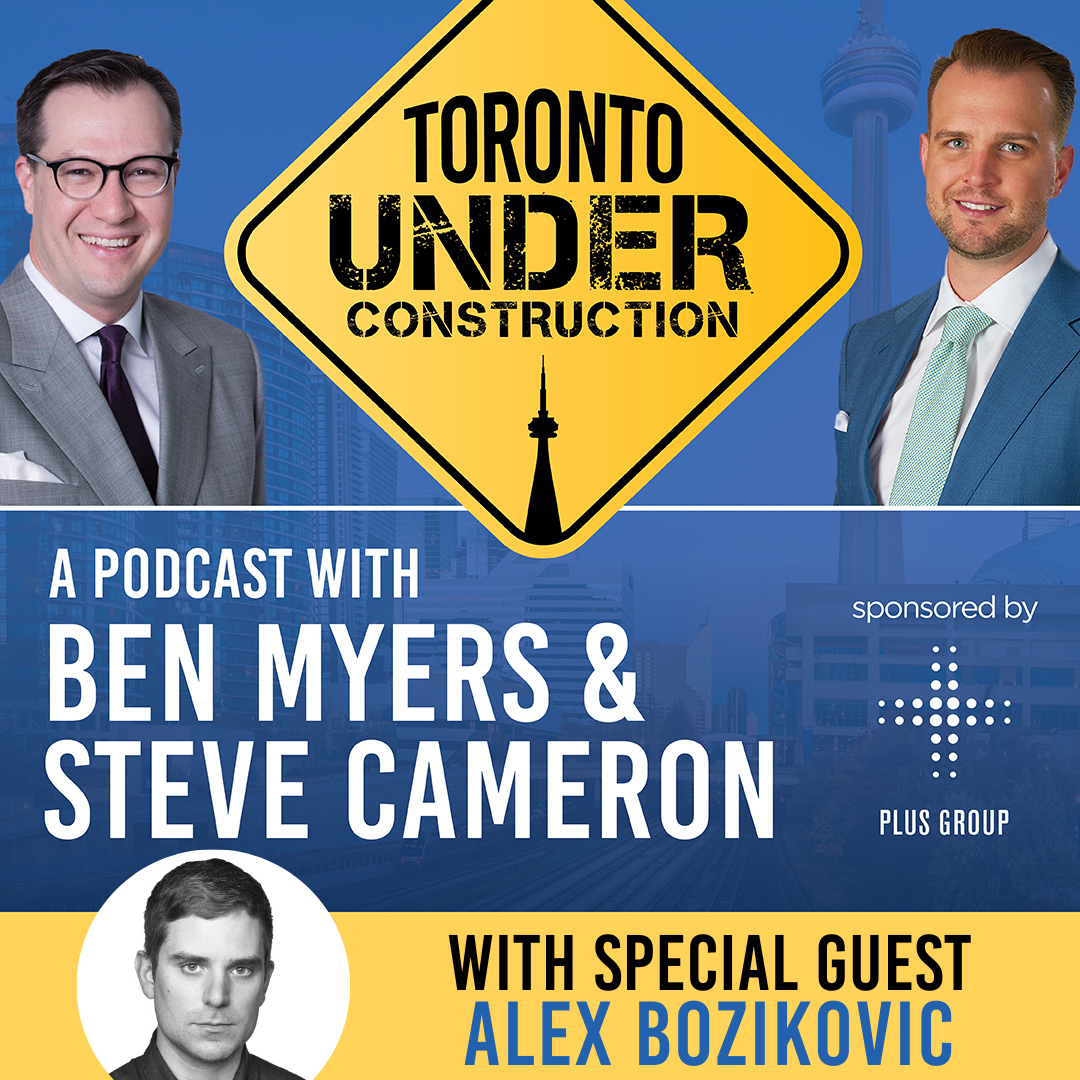 Toronto Under Construction is excited to welcome our first Architecture Critic to the podcast. Alex Bozikovic, from the Globe and Mail, kicks off episode 42 by discussing his career path to being a journalist, and how he ended up working his dream job. He shares some details about his background, which includes writing about how local politics work, the planning process, development economics, and how deals come together. “The stuff that makes a city function is not ideas that architects come up with,” says Alex. “It’s economics, politics and social changes of all kinds…The thing I often try to work towards is to capture all that stuff and see how buildings and the way we build, reflects all of these larger forces.”

The discussion moves on to the importance of architecture to a city. Ben shares his thoughts on retail, density and the importance of interesting buildings to a city’s streetscape. Alex concurs by saying “what happens on the ground and how a building interacts with the street and the general public, that’s kind of the whole ballgame. If you deal with that, and deliver some degree of affordability in a housing project, for me, you’re most of the way there, no matter what colour the building is.”

Ben talks about the Pug Awards and how the buildings that do really well, in terms of design, are typically buildings that aren’t that different, like office buildings. He mentions how balconies have somehow disturbed the eye and Alex agrees that simple buildings are good. Alex mentions that we’ve somehow landed on this idea that variety is necessarily good, but buildings that work well are simple visually from a distance, but interesting from up close. He goes on to say this simple recipe is the opposite of what we do right now. “Architects, developers and builders really need to think a lot harder about what is going to work well from the street, what is going to serve the street well, and what is going to be timeless.”

Ben launches into his next question, asking Alex what’s the value of heritage preservation versus building something new? Alex shares that he has a peculiar take on this because he is the co-author of a guidebook to Toronto Architecture, and has spent years studying the architectural history of Toronto, and more generally how this city came to be. He also mentions that he is very YIMBY friendly and that he understands that big cities that are growing need to make room for new stuff. He says he appreciates the importance of heritage, but he’s also willing to criticize overreaches in heritage. He goes on to say that Toronto is in an interesting spot, citing a project at Bloor and Dufferin, that was the redevelopment of a school site. What was missed there, Alex says, is that the city’s heritage planners ignored the site completely and decided not to protect the buildings. In the end, only part of one of the buildings is being saved, and he believes that that is a real oversight.

“Public buildings are important in the history of a city. They have a lot of memories and social history attached to them, and in many cases the architecture is also really good.” Alex stresses that this doesn’t mean that no development should happen there, or that you can’t have new development while maintaining some degree of heritage. It is possible to do both, and he believes that this was a miss for the city. “Adding a lot of new housing in that location makes a lot of sense, but in design terms, I think that a lot of that density should have been pushed into fewer, taller buildings, so more of what was already there could have been retained. The balance of old and new isn’t always easy, but you can do them right – like in the Distillery District. These two things can coexist and when done well, it adds a lot of value.

After a bit more discussion surrounding design, Ben jumps in to talk about the new planning rules, specifically around the change to rental replacement. Ben, playing devil’s advocate, asks how does the city weigh demolishing old rentals for new buildings with more units. Alex responds by saying that the right answer isn’t one of the other, but both, and. The solution to that is finding ways to allow and incent new housing developments that do not displace people. That should be the goal of housing policy and the industry, says Alex. The guys discuss opening up new land for development, so that new development doesn’t have to replace existing buildings, as well as allowing developers to assemble homes from owners, who can profit.

Alex goes on to say that the house neighbourhoods are where the smallest density of people live, but where people have the most power and the most ability to control their destinies and that’s the last place we are choosing to put housing. He says community life happens where people gather, where the shops and restaurants are. If those go away, neighbourhoods get worse, if houses go away, people aren’t affected. “For some reason, we have chosen to focus all the growth in Toronto exactly on the backs of tenants and exactly on top of commercial strips of where the social life of the city happens. It doesn’t have to be that way.”

Ben chimes in to discuss the missing middle, and how important these developments will be to the city. He also mentions the importance of these projects being successful (reducing charges on developers) so that mid-rise developers can build in the city and provide more supply by making neighbourhoods like Weston and Caledonia viable communities.

Alex launches into the politics surrounding real estate development and says the industry needs to make a case for what they do. The guys discuss how everyone is always mad at the developer for how much money they are perceived to be making, but no one is ever mad at the landowner who sold the property for millions. Alex cites the Honest Eds development, saying that everyone was mad at Westbank, and saw the Mirvishes as the victim rather than the sellers.

The politics are what they are, he says, but the positive message is that the politics are changing. Young people, who don’t own homes, are having a voice, because the traditional politics of NIMBY don’t make sense to them. “Developers need to make a case for what they are doing as important and valuable, but they have to put the work in. They have to produce a good product and promote what they do as being good for everybody.” Alex goes back to say that the Honest Eds project is going to be one of the best projects Toronto has seen in 30 years because of the partners commitment to creating a building that will create a place that is not like anywhere else. Alex says he truly believes that developers can make a good return by making a good city, and by making buildings better than their competitors.

Ben switches gears to discuss affordability and states that he believes inclusionary zoning should be included in every single building, with the city of Toronto contributing X amount to that project to deliver X amount of affordable housing units, and then they offset those units onto non profits to manage. Ben says we should be doing so much more to integrate city services into those buildings including daycares, libraries, community centres and more. “Developers and municipalities should be working together to integrate this better”, says Ben. Alex agrees and shares his experience and past discussions with developers on how this can be done better and how the public and private sectors can do business together and use public real estate to benefit both the public and private goals. Alex cites a CreateTO project with CentreCourt and Sweeney Architects that uses the site of a former fire station that will include a park, a high rise with below market grade rentals and a daycare.

Alex also cites the Toronto District School Board’s land trust as missed opportunities to integrate private and public spaces to make Toronto better. “I think the integration of public services into new development is better for everyone concerned, and it pays financial dividends to the government. We should be doing this all over the place and using the proceeds to build social housing,” says Alex.

The greenbelt has been a hot topic of discussion as of late, with Doug Ford opening it up for development, so Ben asks Alex should we be concerned about sprawl? Alex says we absolutely should be concerned and it matters. He shares that the GTA is already a very sprawled area and doesn’t believe we should continue to build this way. There is a lot of room to build infill and it needs to be a focus of the government moving forward. “Intensification is not just a nice thing to do, it’s going to be absolutely necessary because the GTHA is projected to grow by about 2 million over the next 40 years.”

As the episode comes to an end, the guys discuss the Sidewalk Labs project briefly and then Ben asks Alex some rapid fire questions like “is Uber good or bad for cities?” “Does Toronto need a ferris wheel?” “When Ontario Place is reopened will it suck?” “Do you ever go to Cityplace on purpose?” and more!

Tune in to our latest episode:

If you’re looking to get in touch with Alex please visit https://www.theglobeandmail.com/authors/alex-bozikovic/