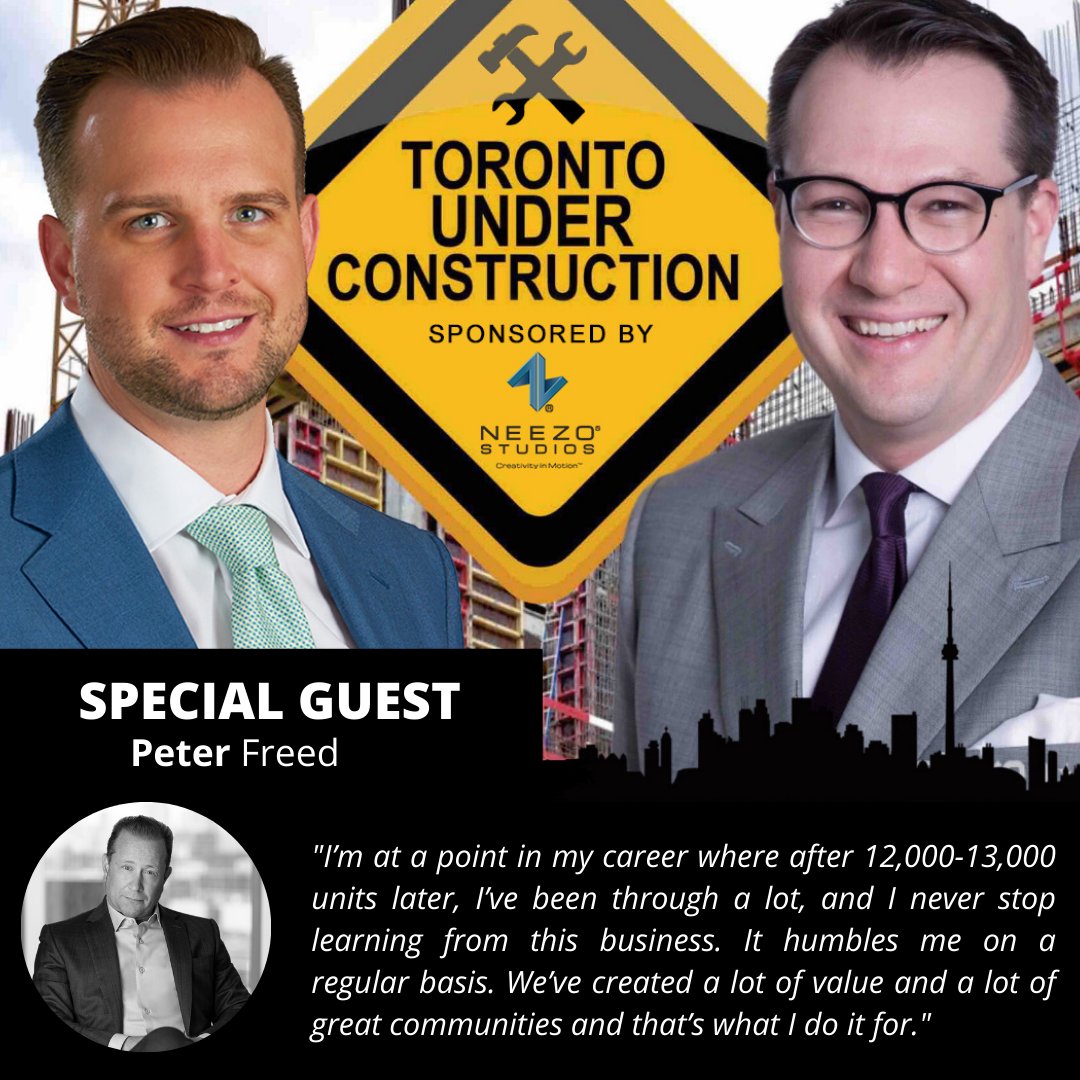 In this episode of Toronto Under Construction, Peter Freed, of Freed Developments welcomes Ben and Steve into his loft office in Forest Hill. The three sit down (socially distant, of course) over a bottle of Caymus wine to discuss Peter Freed’s journey in Toronto Real Estate and pick his brain about topical subjects surrounding the market today.

To introduce Peter, Steve describes Freed Developments, as one of the largest private developers operating in the City of Toronto; citing that under Peter’s leadership the organization has built over 30 projects and has expanded to include key vertical operational divisions such as: FirstCon Group Limited, PSR Reality and Freed Hospitality.  With over 12,000 units sold and nearly $10 billion in development, Peter Freed has and continues to make impressive moves in Toronto Real Estate.

The guys jump back in time to discuss Peter’s rise to success and where it all started. After attending McGill University “for about a half an hour”, Peter says, he met a couple guys that had a business selling paper and other supplies to restaurants and businesses. This really solidified the fact that Peter wanted to own his own business – and he moved back to Toronto to do just that. After selling cleaning supplies, like his friends from Montreal, he moved into the home building industry. From unpaid labourer, to site super, Freed worked his way up building houses and industry relationships. “It was a crash course to learn the production housing business. I did all the marketing and sold the houses on the weekends from the trailer. I loved it.” Peter tells the guys.

In 1995, Peter started Freed Developments, building and renovating custom cottages and homes. He saw that the real opportunity was in being a developer. In his late twenties, after building 25 estate homes in Aurora with a partner, he found his first development site at Yonge and Sheppard. Building low-rise for the first 10 years, Peter acknowledged that his successes were built in part by the partnerships, relationships, trust and learnings he had in his early career.

In the early 2000s, he started his first project on King West; the area he is so famous for developing. In February 2004, Peter paid $2.24 million for the land at 66 Portland. “There was no precedent, it doesn’t take a genius to look backwards and point at seven things that already happened and what the math was.” “When you go to a market that doesn’t exist yet and you have to forecast and vision and make some assumptions that you have no point of reference to, that’s not an easy thing to do. And it’s a risky thing to do.” But as a young entrepreneur that had capacity to take the risk, Peter went for it and it clearly worked out in his favour. He went on to build more and more successful projects in the King Street West neighbourhood.

Peter shares his experience working with Brad J. Lamb, as his brokerage before he started Brad J. Lamb Developments. Through that inevitable parting, Peter started PSR Brokerage that continues strong today. In recent years, Freed Developments has partnered with a variety of builders on projects around Toronto including Time Equities (for the Thompson Hotel and Muskoka Bay Club) and Elad (Galleria).

The guys dive into the details of the Galleria project and how it came to be. Peter divulges the steps he took, the easy math of the site and how he knew the project was a huge opportunity for Freed, Elad, future purchasers and the community. After years of having his eye on the property, in partnership with Elad, they purchased the land and worked with the City to develop plans for the up and coming area.

Another project in particular that sparks intrigue with Ben and Steve are the Redpath towers at Yonge and Eglinton, which were really the first towers built in the area making a huge splash in the community. Just down the street from Redpath, is the ArtShoppe condos. Peter goes on to tell the guys about his experience working with Karl Lagerfeld, who designed the lobby at ArtShoppe.

“To meet interesting people in the greatest cities in the world and to import those talents and to bake those skill sets into your own projects and then build them and they’re permanently there. That’s why I do what I do.”

The three continue to discuss Freed’s impact on Toronto’s art and culture scene ranging from retail and entertainment tenants like Lavelle and the Thompson Rooftop, within his projects to recently purchased brands like Toronto Fashion Week. Peter continues to be successful and says he relies on learnings over the years, inspiration from travel and his own visions of what he would want. Conceptualizing venues like Lavelle was easy for Peter, but he shares a story of selling the vision to his investors and partners from Saskatchewan.

The episode wraps up with Ben and Steve’s famous rapid fire and Peter answers (and sometimes pleads the 5th) to questions like: “does co-living have legs, or is it just a fad?”, “in your projects, are investors doing their own research or are they relying on their brokers?”, “will Freed be accepting bitcoin anytime soon?”, “who is one person in this industry who has been a mentor […] throughout your career?” and more!