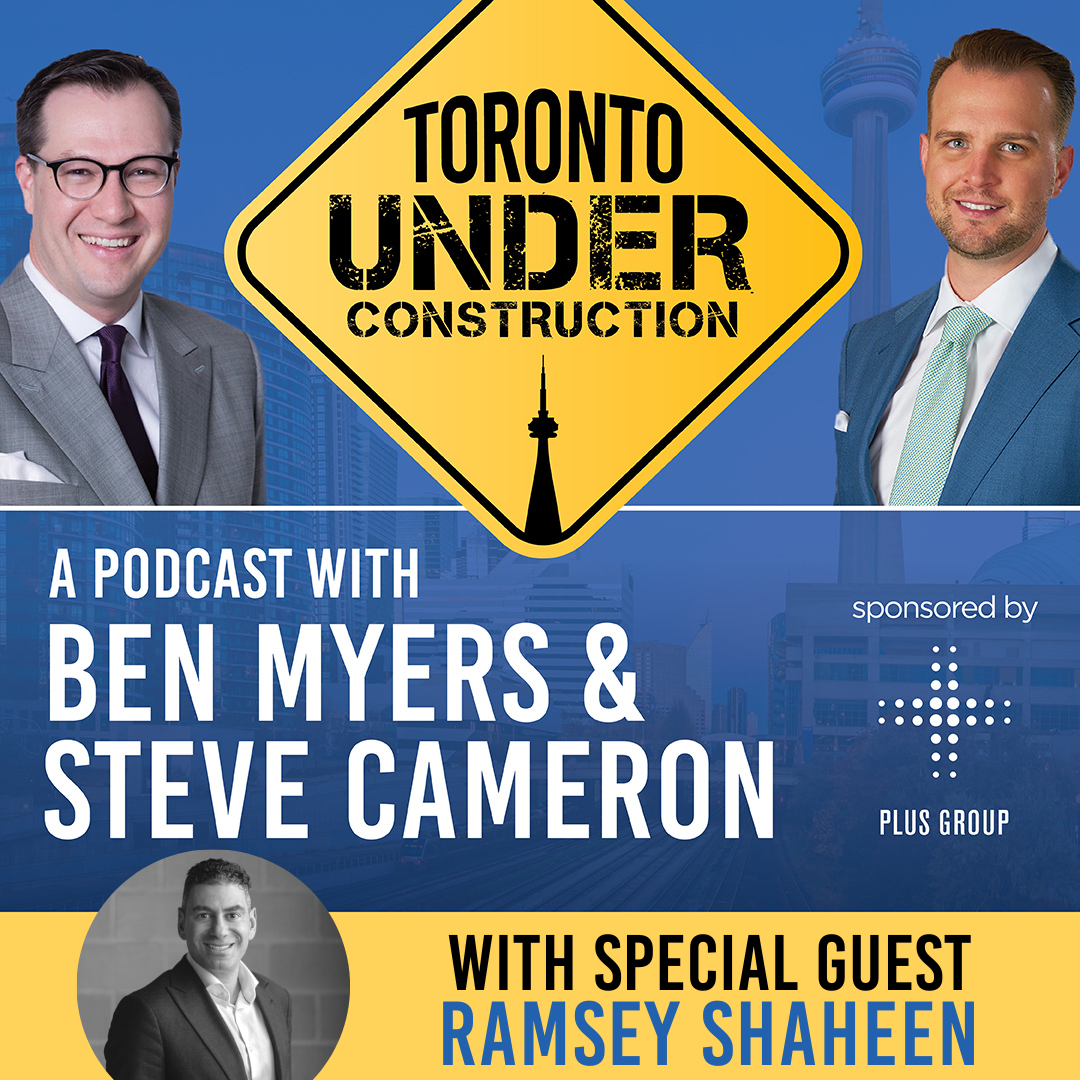 Episode 43 of the Toronto Under Construction podcast welcomes Ramsey Shaheen, President at Cachet Homes. Ramsey obtained his Bachelor of Engineering from the University of Toronto in 2005 and worked as a Development Manager of the Orlando Division of Pulte Homes, the 3rd largest residential home builder in the United States until 2008. Realizing that he was ready to settle down back in Toronto, Ramsey joined Cachet Homes in 2008, holding the titles of Director of Development, and Vice President. In September of this year, he was named President of Cachet, a low-rise developer and builder with communities across southwestern Ontario.

Having worked in the Texas/Fort Worth area himself, Ben kicks off the episode asking Ramsey’s about his experience working for Pulte Homes in the US residential market (Florida) and how it differs from working in Ontario. According to Ramsey the major difference is around policy and the entitlements process. “In Ontario, the planning policy is very restrictive in where you’re able to build,” says Ramsey. “In Florida, someone at the municipality once said to me “it’s your God given right to go bankrupt, so the ball is in your court with respect to where you want to build.” The guys chuckle, as he continues to explain how the entitlement process is very similar but the biggest difference is in respect to the land supply and the way they proceed in respect to their developments. A lot of the infrastructure is front ended and how they finance the projects is different because these organizations are national, public firms. In Ontario, infrastructure progresses as things sell, and as we continue to build out the communities. In Florida they have the ‘build it and they will come’ mentality. Steve chimes in and mentions as Cameron Stephens looks to expand south of the border, he has spent a lot of time researching the US market, and what he’s noticed is that most developers use a broker, saying there is no direct lender relationships; it’s not as personal. “No pre-sales. No guarantees,” says Steve.

After sharing his experience at Pulte Homes, Ramsey details Cachet Homes’ history and explains why he felt it was a fit for him to make the switch back to Toronto. Founded in 1981 as a custom home builder, Cachet evolved into building estate style communities, then a merchant builder, to now a production home builder, building master-planned communities. The guys discuss the different models and how they have changed over the years.

While on the topic of policy, Ben asks Ramsey what he thinks of Bill 23 and whether it’ll have an impact on Cachet Homes’ business. Ramsey says it will definitely have an impact, but goes on further to say that he thinks all the changes the Provincial Government is making will ultimately have a positive impact with respect to bringing new housing supply. “It’s a complicated problem, and unfortunately there is no silver bullet to solve it,” says Ramsey.

Ramsey mentions he was at a recent roundtable with a group of developers and Minister Steve Clarke, discussing how they can help the government fulfil their mandate to build more homes and in his opinion there is two major issues:

Will it work? According to Ramsey these things should improve the process, “whether it happens or not, we’ll have to see how the municipalities implement the legislation. That’s the biggest key. Bill 23 is the start of the process for dealing with these systemic issues.”

Steve asks Ramsey to expand on what he means by systemic issues, and Ben says it’s the anti-growth, anti-development mindset. Ramsey relates it back to his time in Florida, post housing crisis crash, and says Ontario has never really been through that. “We’ve had no significant pain. Everyone (builders, trades, consumers etc.) in Ontario has been a beneficiary of the boom in Ontario, so there has been no reason for change.” Ramsey goes on to say that we’re starting to see proponents for change, especially in regard to the Provincial Government’s conviction for affordability, but there will always be naysayers and people who don’t want change. Ben mentions 80% of the articles on Bill 23 are negative.

As the conversation on Bill 23 continues, Ramsey says “Bill 23 is nothing that crazy, it has nothing to do with the greenbelt.” Ben concurs and says those lands being brought into the greenbelt has nothing to do with Bill 23. Ramsey goes on to say that the lines that define the greenbelt from developable lands is not a scientific exercise; these are not economically or environmentally sensitive lands. He says there is a practical way to develop responsibly, while still protecting those other interests. Education is needed, but unfortunately we’ve run out of time.

The rising cost of construction has been a hot topic in 2022, and Ben asks Ramsey about their pipeline and asks if Cachet Homes is sitting on developable land in hopes that prices come down? Ramsey says that’s not in Cachet Homes’ strategy, but that they are focused on fulfilling construction of the land and homes they do have. As they continue to discuss costs and pipelines, we learn that many trades are still seeing a backlog from this year. Steve comments that a popular window installer currently has 1,700 homes he needs to provide windows for. “You can barely get a quote right now, let alone any wiggle room on price,” says Steve. Ramsey goes on to say he has been very much challenged by lumber and windows over the last 6-12 months. “At the end of the day we need to fulfil our commitment to our homeowners, and the shortage of trades has made that a challenge.” The guys discuss some indicators that prices are starting to soften, and Ramsey says that he hopes to see more of that in the next few months.

To reduce costs builders usually take one of two paths, outward vs. upward. Ben mentions many developers have gone up, while Cachet Homes has decided to expand outwards into tertiary markets and asks why Cachet made this decision? Ramsey says it was an evolution, especially as land prices were going up, it was harder to compete with the legacy families that were buying land, so they started to see that the risk/reward proposition was not as attractive. “If we were going to scale and create a production home building operation we would have to go out a little further outside the GTA and we experimented with that, and we saw that we could create a very attractive value proposition in these suburban markets. We saw an opportunity in small-town Ontario that was still connected to the GTA.”

Steve jumps in and asks “If you were Minister Clarke, what would you do to solve the affordability issue? Ramsey says according to him, the biggest issue to date is the constraints on supply. “It all comes down to policy and we’ve been plagued by 20 years of bad policy and systemic culture. This process is going to take a long time,” he says as he discusses some of the socio economic consequences of our current housing market. “We’re trying to provide a solution and deliver new housing for families. There is no solution for them,  unless you’re willing to drive to tertiary markets.”

As the guys start to wrap up the episode they discuss the difference between the 2017 market, when the Fair Housing Plan was introduced to now and where Ramsey thinks the market will go over the next few months.

The episode ends with Ben and Steve’s favourite segment, rapid fire! Asking Ramsey questions like “what is the latest smart tech you are putting into your homes?” “What percentage of buyers are requesting a finished basement?” “Have you ever built the wrong house on a lot?” “What is the best green feature?” and more!

Tune in to our latest episode.