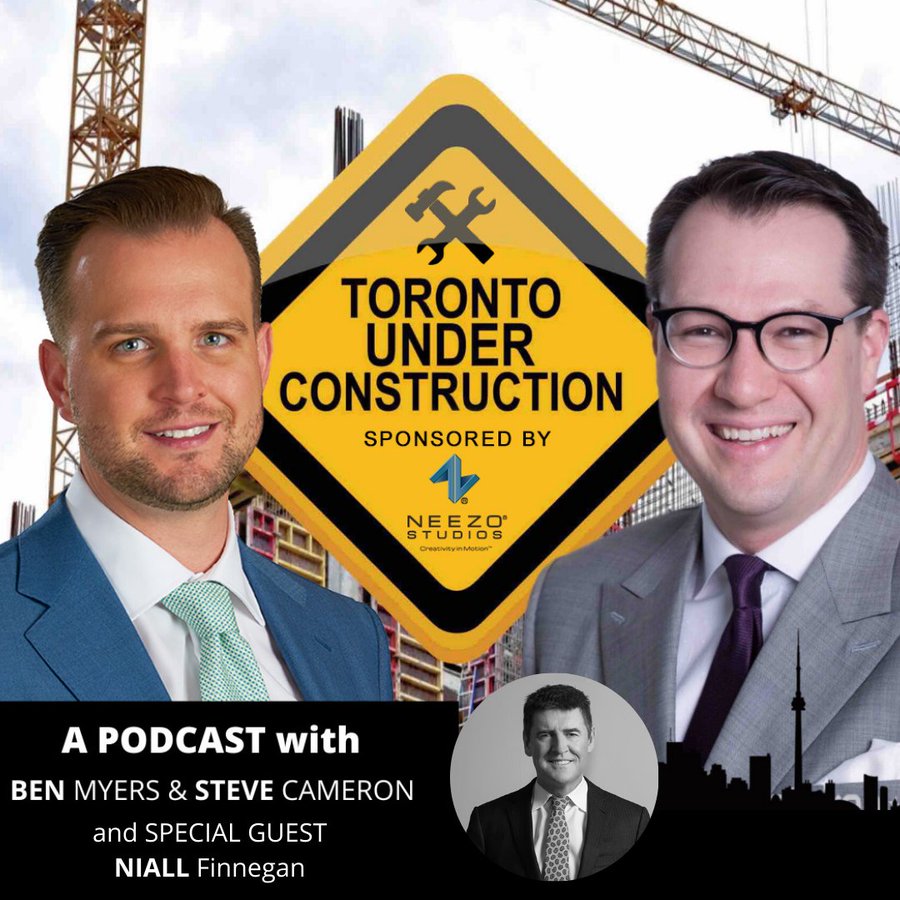 Toronto Under Construction Episode 29 with Niall Finnegan from Finnegan Marshall

In episode 29 of the Toronto Under Construction podcast, Niall Finnegan, a legend in Toronto’s real estate industry, joins us to discuss everything to do with construction costs including government taxes and fees, developer profits, the rising costs of construction and some of the factors that impact pricing and affordability in the GTA market.

As always, we start the episode off with Niall sharing more about how he got his start in Toronto Real Estate. Originally from Dublin, Niall accepted his first job in Winnipeg, Manitoba, where he prepared construction estimates for 4 years before moving to Toronto in 1985 and joining Helyar. Helyar was beginning to offer a new service: Project Monitoring for Lenders, which excited Niall because he could address the overall project, including feasibility, and hard and soft costs, not just construction costs. While working for the lenders, Helyar started getting exposure to Developers who were starting to see the value of Professional Cost Consultants. Thus Helyar became an integral part of the development process and in 2005, Helyar went public, and merged with Altus. Niall stayed on for six years, as President, until his entrepreneurial spirit took over; and after his non-compete expired he started Finnegan Marshall Inc. with Ken Marshall. Niall shares more about his vision for Finnegan Marshall and how as Cost Consultants, his team follows the project all the way through from start to completion.

When project/cost monitoring started in the mid 80s (before the crash of late 89) Helyar would be receiving commitment letters from lenders and were being appointed to projects. But in the 90’s when times were tough, smaller companies began springing up, and developers started to insist on which cost consultants they wanted to use for their projects. Helyar recognized this and started to get involved with developers early on, and through their consistency were able to avoid conflict and work with both developers and lenders productively.

“When we started this firm, we didn’t want to be passive. We wanted to be very involved…. we wanted to work with developers who appreciated the added value we can give. We know what all the Trades are going for, and we enjoy doing this… We have the finger on the pulse of what’s happening and we are heavily involved in the industry, and do pro bono work with BILD. If you want to know what’s going to happen in Development Charges (DCs) or parkland, or inclusionary zoning, or items that are going to impact projects in one to three years, it’s our jobs to know.”

Taxes, Fees and The Rising Cost Of Construction

Niall goes on to discuss how they analyze the market and discusses specific cookie cutter projects (400 units, 40 storeys) and the rising costs of construction.

“In a 5.5 year period, construction costs were up 58%, that’s 9% a year compounded, and what’s really going to surprise you is that soft costs (everything other than construction and land) were up 76% mainly because of DCs (which have more than doubled), educational development charges and parkland (which is tied to land values, which have gone up 150%.)

Steve asks Niall, “what percentage of the budget is associated with taxes (DCs, parkland, Section 37, building permit fees, educational levies, street occupancy fees and HST)? Niall responds “it’s 25%, so if you buy a unit at $500,000, $125,000 goes to the city and the fed/provincial.” Ben chimes in that according to people on Twitter developers aren’t paying their fair share to the city. Steve questions how much more affordable condos would be without these charges.

Steve goes back to his favourite question, “The average pro forma that you are looking at, that the bank needs to see, the profit has to be what percent?”

Niall responds that typically acceptable margins are 12%; less than half of what the government is making.

The guys continue to discuss the costs of construction and Ben reads a quote from Niall from a recent article about the rising costs for form work and asks “is formwork the biggest factor driving up construction costs right now?”

Niall says formwork is the largest cost on a construction site right now but bigger cost increases have been felt this year for mechanical, and to a lesser extend, drywall, reinforcing steel and electrical. “The increases are driven by many different factors, but demand and the shortage of land are the biggest issues in the industry. Right now, in the GTA, there are only a 3 months supply of unsold units. In the high-rise market that’s 3.75 months, and in low-rise it’s less than a month. A balanced market needs approximately 8-9 months.”

Why is this happening? Our approval process cannot keep up with the demand. There is a big disconnect between the intentions and necessity of increased immigration. Niall goes on to say that “if we don’t continue to have very high immigration levels, we are going to run into a problem because our population is aging. The remaining people that are able to work is going to be declining, and our birth rate is not substantial enough. So the only way we can address this as a country is to increase our immigration levels.”

How does this tie into the price of real estate? Niall says “If you’re going to have 350K people come into the country, you need to provide housing for them. And if that’s what our goals are then we  need to free up land and density…. We need to get rid of the NIMBY approach and force increased density. There is no other way. It’s not going to happen through urban sprawl. People want to live in Toronto.”

The guys discuss how many of the immigrants coming today have more money than they did 60 years ago. A lot of them have cash and are coming from unstable economies and their safest place to put their capital is to buy real estate.

There isn’t enough supply. So Steve asks, how do we fix this? What’s the solution?

Niall shares his thoughts on population growth, supply and demand and how we need more than what we have the capacity to build.

“Municipalities need to have a discussion with the feds and the province and the cities on resolving this…. We need to stop departmentalizing government strategies” says Niall. “Then from the point of view of building the homes we have a huge shortage of trades…. We need so many more skilled trades in order to build the homes we need. There’s no point in freeing up the land if there is no one to build the homes, and that’s a structural problem that is all interconnected.”

The guys transition the discussion and Ben asks whether developers will ever be able to build first before getting pre-sales? Steve shares his point of view as a lender, sharing a story about a trip to New York pre-pandemic, and Niall and Steve explain the issues on why they don’t see this happening.

“One of the reasons the Toronto market has been so successful in executing condo projects is because the lenders are very disciplined. Their discipline has been very positive for the industry,” says Niall.

Niall goes on to share that some of the most successful condo projects have been ones that started out as a rental, got financing as rentals, and switched to become condominiums halfway through. He says this wasn’t done on purpose but they were able to to capture the wave of increasing sales costs but lock in their construction costs way earlier, so the margins were better.

The guys discuss the two distinct markets in the high rise condo business 1) the investor and 2) the end user. Niall says that the vast majority of condos sold are investor driven, which helps bridge the gap between sales and move in date, ultimately helping both the developers get financing and end users who have a shorter time frame and want to move in within a year.

As we round out the end of the episode, Ben asks Niall about efficiency and says “I worry that if we shrink the corner units too much, the hallways get longer, and then the efficiency of the building gets worse and there’s less to sell.”

Niall agrees and says this is one of the things his firm is able to offer his clients and something that he does differently. “Right at the start of a project, way before it’s launched, we’re all over saleable efficiency. There’s two rules in real estate 1. buy your land at the right price and 2. your saleable efficiency. If you get that wrong out of the gate you’re dead. don’t even try to recover”.

He continues to discuss how his firm quotes saleable efficiency, touching on GFA (Gross Floor Area) and GCA (Gross Construction Area) and explains how his firm quotes efficiency against the full construction area saying that a typical building on a 750 square foot plate will be around the range of 77-78%. Smaller plate sizes will be low 70s, and larger plate sizes are 81-82%. “It’s so critical to get this right or you can lose your profit margins.”

The guys wrap up the episode with their rapid fire question and answer and ask Niall questions like has anyone ever complained about your accent? What’s a bigger problem in Toronto development, bad developers or bad planning and policy? Will we get to the point where we are building more rental than condos? If you had one piece of advice that you could pass along, what would it be? and more!

If you’re looking to get in touch with Niall visit www.finneganmarshall.com

Listen to the episode now!

Interested in being a guest on our podcast? Send us an email!