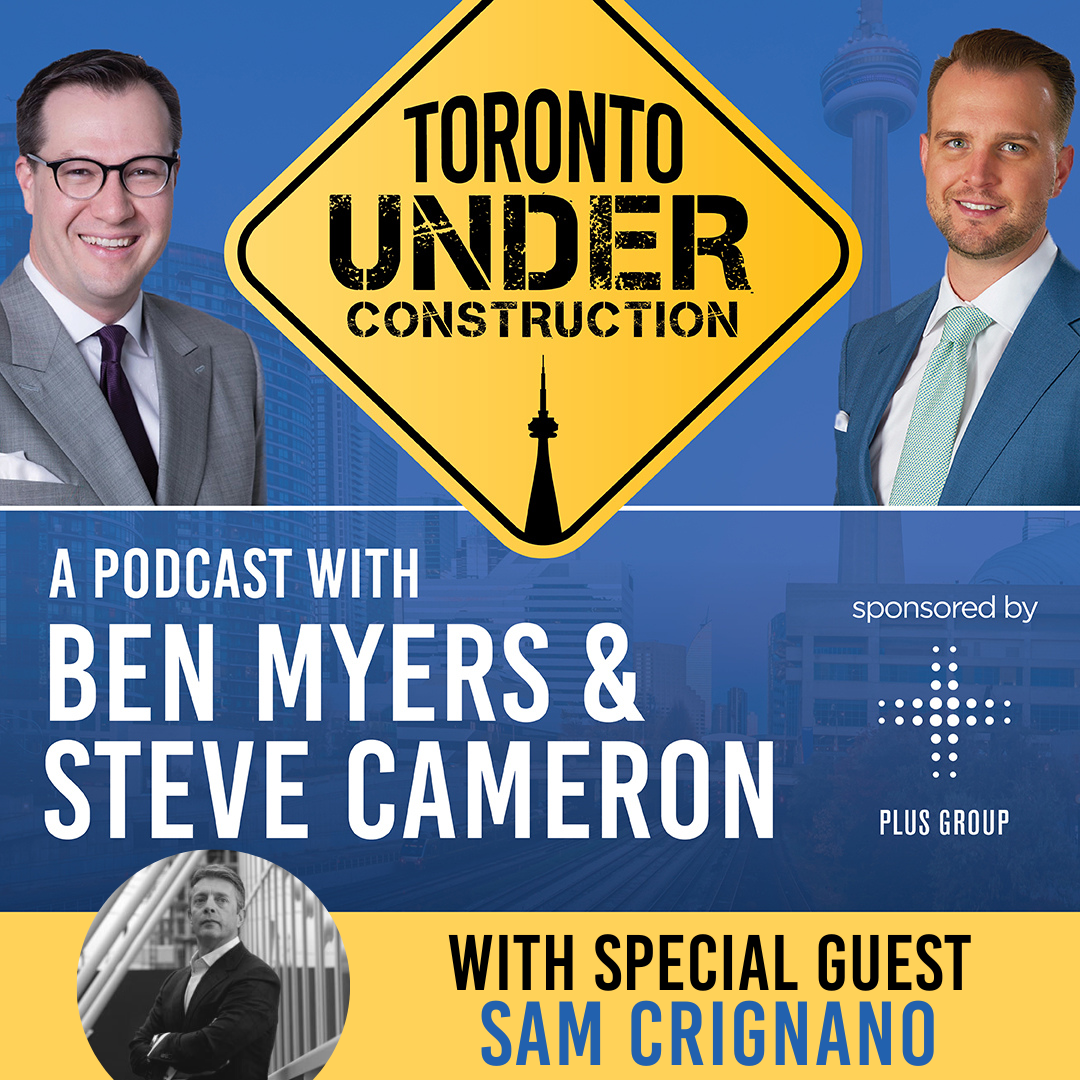 If you enjoy the show, please support or sponsor, The Plus Group: Plus Group (theplusgroup.ca)

The latest Toronto Under Construction podcast features Sam Crignano, the founding partner and President of Cityzen Group. Sam is a legend in Toronto real estate, with over 35 years’ experience in mixed-use and high-rise developments. His background and expertise touch every part of the real estate process from sales and marketing, commercial and land investment and assembly, acquisitions and planning and development of residential and mixed-use sites. Sam was instrumental in bringing the Madison Centre, Signatures on Bloor, Monaco, Hemingway, 88 on Broadview, The Essence, The L Tower and many, many more notable and innovative projects to market.

Sam starts by discussing his entry into the development world and credits his own family’s entrepreneurial spirit for developing his drive and ambitions. From high school, he got his real estate license and started working in the industry with his father-in-law; they worked primarily on industrial parks and projects. After some time, Sam left the business with his father-in-law and went out on his own with a new business partner. At the time, there was business in buying large plots of land, dividing it and selling it off to builders. This type of work took him through the late 80s all the way to the crash of ‘91. At that point, he went back into business with his father-in-law. There were changes in the political leadership in Ontario that had an impact on his business. By ‘95, the project at 55 Bloor St East brought him back from the ‘depression’. He continued to work in residential development in and around the Yorkville area, but Sam still had the itch to go out on his own and started Cityzen Group. His next project was Hemingway, at Lawrence and the Don Way, which he did in partnership with Westdale Properties.

Sam goes on to tell the story about his iconic project in Mississauga. Absolute World, also known as The Twisted Sisters or The Marilyn Monroe buildings. Sam mentions a major reason for the project’s success was due to zoning and limitations, or rather, the lack of limitations. The bylaws did not limit the height, did not limit the number of units and did not limit the density. The only requirements were around parking. For every unit, they had to supply a parking spot.

When initiating the build in Mississauga, Cityzen Group held a design competition. They had many submissions and the winning design was the one you see today. The twisting design seems complex, but Sam explains how the tower design works. The first tower sold out quickly, and at a premium and so came the second tower, albeit slightly shorter. At the time, comparables were selling for $500 per square foot, and Absolute World sold for $600 – $620 per square foot. Sam explained that he didn’t find anything that could compete and hasn’t built in Mississauga since.

The guys discuss developers’ willingness to take risks despite the incredibly talented designers and architects in the city. The conversation merges into a discussion on the value of architecture. It’s one thing to look at a beautiful building, but being inside it, the user is looking at the functionality of the space. Sam discusses L Tower as an example, and explains how the design evolved into its final shape, which is a result of City regulations and ensuring Berczy Park wasn’t shadowed by the building.

The conversation naturally moves to one of our favourite and hottest topics on the podcast – affordable housing. Sam shares that back in the day there were many government-funded projects that he’s worked on with Toronto Housing for low-income individuals and also on elder care and living centers. He mentions one specific grant program where they were given $125k for every unit they built that met the affordable housing criteria at the time. They negotiated a similar program for affordable rentals at Lakeshore and Cherry; after 20 years, the building’s units can be rented at market value. Sam says that creativity in proposals is what the city needs to make affordable housing a reality.

Steve, Ben and Sam discuss the market volatility, the rising cost of construction and the rate at which the real estate market is changing. Sam comments that he could have his guys draw up a budget this week and by next week it’s out the window. He mentions that he paused most of his projects in the last two years due to this uncertainty, and states that many were ready to go to market, but he just didn’t feel comfortable. The guys discuss canceled projects and Steve predicts we are going to see this happening in droves as many developers pre-sold their buildings and costs continue to skyrocket. Sam suggests we may see some adjustments, both on the revenue side and on the cost side. Real estate is a market that ebbs and flows, it’s cyclical. The guys discuss interest rates and agree that the days of ‘free money’ are over.

What’s next for Cityzen? Sam says he’s a deal junky and Cityzen has a number of projects that he’ll take to market when the time is right.

Moving a little west of Toronto, the guys talk Hamilton. A developer in Hamilton launched a project in March 2021 at $725 per square foot and in Summer 2022, they launched another site selling at $1,050 per square foot – pricing has gone hyperbolic in that marketplace. For Sam, revenue numbers are encouraging, and that goes along with the change that Hamilton is undergoing. It’s no longer a blue-collar city. While still maintaining a gritty nature, the vibes are great and Hamiltonians are proud. Sam is excited about the future of Hamilton.

As the episode winds down, Sam tells us that back in 2016, his granddaughter started showing symptoms that something was wrong. After extensive testing, they found out that she had Tay Sachs. This rare genetic disease primarily affects Ashkenazi Jews and people of Eastern European dissent. Tay Sachs is devastating and life threatening; most kids diagnosed with this disease don’t live past age four. This led Sam to create the Blu Genes Foundation, as he is passionate about fundraising to support research projects and find a cure for Tay Sachs and other genetic conditions. They host an annual bike ride in Niagara Falls, called Velo Blu and last year, raised over $300k. This year, their goal is to raise $400K to support new Tay Sachs research at SickKids.

Velo Blu will begin at the beautiful Peller Estates Winery and will have riders select a ~30km or ~75km route to travel on a picturesque ride through Niagara-on-the-lake.  Guests who choose not to ride can participate and experience Niagara with an agenda we’ll create just for them.  All guests will culminate back for celebratory remarks, great food, wine and sense of accomplishment.​ To learn more or to register for the ride please visit https://blugenes.org/event/velo-blu-2022/

As usual, the guys end the podcast with a rapid-fire question and answer period and ask Sam questions like: “What’s the most used amenity in a new project?”, “Do you think companies really care about ESG?”, “Are employees more or less productive when working from home?”, “Outside of Canada, what is your favourite city to visit?” and more! Tune in now for all this and more!

If you’re looking to get in touch with Sam or Cityzen Group please visit www.cityzen.ca