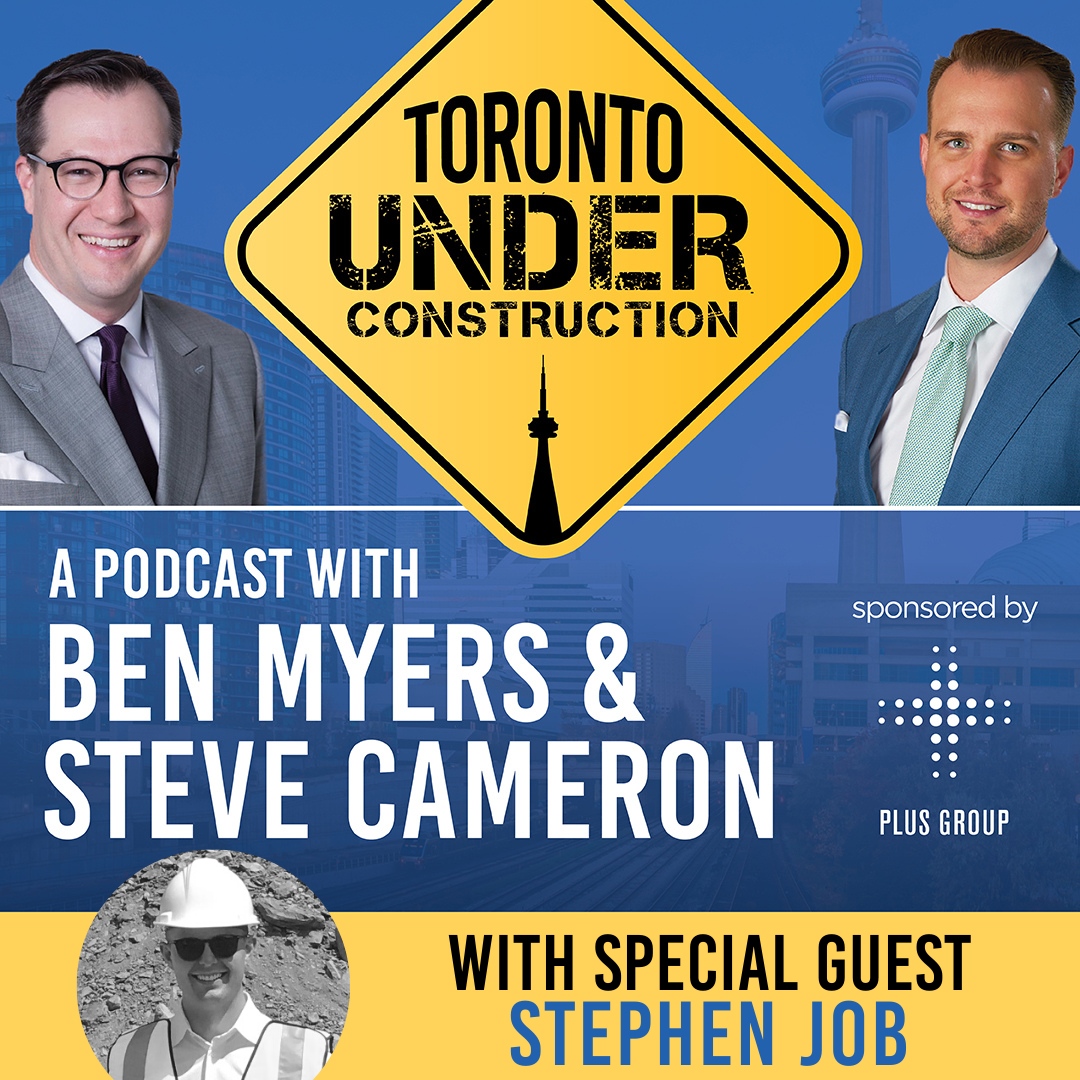 The Toronto Under Construction welcomed Stephen Job to the show for Episode 32. Stephen leads the development team at TenBlock, a Toronto housing developer with over 6,000 high-density homes currently in the planning approval process. Stephen has worked for some of Toronto’s top developers including DiamondCorp and Main + Main, and we were excited to chat with him about his journey!

This episode is sponsored by The Plus Group. The Plus Group comprises 5 distinct companies; RN Design, SRN Architects, Salesfish Sales Software, Coolaid Studios and Studio UNO Interior Design. Their mission is simple: revolutionize the real estate industry through efficiency, innovation and quality, while adding value to the client experience. Learn more about The Plus Group, and any of their 5 companies at ThePlusGroup.ca.

If you enjoy the show, please support our sponsor.

As always we start the episode by rewinding to Stephen’s early days. He discusses his schooling and tells the guys how he ended up going to planning school at USC, mentioning that this was the key to the path he wanted to take in life. After completing his Masters, and working a few jobs in Southern California Stephen returned to Toronto to join Crestpoint Real Estate Investments.

Crestpoint was a great place to start his career, says Stephen. However, he realized he wasn’t going to be able to do full time planning and development here, which led him to his move to Main + Main, where he got to work on many different projects in different stages of the development process. Again, Stephen recognized pretty quickly that he wanted more, and applied to be a Development Manager at DiamondCorp where he got to work on The Well, Upper East Village, and Reunion Crossing.

After gaining some incredible experience in the industry, Stephen made a move to Tenblock Developments; a new manifestation of an old business. The family behind Tenblock has been gradually building their real estate empire across Toronto, and Stephen found himself reviewing their portfolio of properties to understand how he could maximize their usage.

The more Stephen looked into some of Tenblock’s older buildings, he began to recognize that there was a significant opportunity for more height, and realized that the path for some of these buildings would be to take them down. Of the four rental replacement applications Tenblock is working on, the ratio is 1 to 5. For every existing apartment building they are taking down, five more will be built, in addition to 100% replacement. Stephen goes on to explain how this is very delicate work, and explores a few of the valid questions he gets asked on a daily basis.

As Stephen explains more about rental replacement, the conversation jumps to suburban living and commuting, and Ben comments on the city’s lack of family sized units. Ben states “I hope the affordability act will allow for larger homes, especially built in the city.” He cites his recent renovation and how he struggled to find 1,000 square foot units to rent in Toronto. Stephen mentions more family sized units are coming to market, but mostly in expensive boutique buildings. “This represents one of the possibilities of what could happen if the policy stranglehold on the neighbourhoods are slowly and reasonably relaxed.”

The guys go on to discuss the importance of unit mix, and how it will impact the viability of the city for the long term. This leads back to the conversation on rental replacement and how Tenblock handles tenants during a redevelopment. “One thing we’ve been pressed on by the city lately is, ‘what if the traditional package is not enough, and they can’t find a place to live?’ It’s a fair question, and it will typically land on the Developer. It’s an expensive process, but if you can’t redevelop a project while treating people fairly, then you shouldn’t do it.” Stephen goes on to say that real estate matters too much to people’s lives, and all developers get tarred with the same brush, but he believes that developers do well by doing good. “If you do it right and work with the city, and try to find proposals that bridge the gap, that’s how I can sleep at night.” Steve mentions at Cameron Stephens he calls this a Win! Win! Win!

Steve asks Stephen about being on the Property Standards Committee, and Stephen shares details of how Torontonians can join these types of public committees and give back through public service. Stephen tells the guys about some of the cases he’s had to deal with during his time on this committee and recommends everyone go to Toronto Public Appointments and apply to be part of helping Toronto grow!

After ranting about bike lanes, Steve moves the conversation over to planning and asks Stephen to comment on Toronto’s planning policies. Stephen sheds light on the official plan and how it’s been built around keeping the neighbourhoods exactly the way they are. He mentions that there have been a few small changes to allow for Laneway Housing and Garden Suites, but that fundamentally we have a city starving for housing supply and most of the land area around the city cannot be touched. He expands on some of the problems including population shrinking, concentrating growth and intensification in the centers and continues discussing the issues of being unable to build even a duplex that might change the character of an area. “The city has essentially cast our neighbourhoods in amber, so it can’t change. I just think this is a problem, at a time when we need more housing supply.”

“We have a clear problem with supply, and the official plan doesn’t allow for housing to be created in Toronto, except in the most intense forms.” Stephen goes on to talk about the unintended consequences of the official plan and how it’s affected the growth of our city into tall towers in a concentrated center. There is no opportunity for newcomers to Toronto to enjoy the neighbourhoods. “The gap is now unattainable. Unless you earn an extraordinary income, you cannot buy into a neighbourhood anymore. And that’s a problem, and the land use policy is the cause.”

The guys continue to discuss the planning policy and the effects it’s had on the affordability in Toronto. Steve asks “how do we fix this? I don’t think there is an answer, but how do we get there?”

“We’re starting to see a shift in the conversation, and I’m encouraged by this,” said Stephen. “I just saw today that AOC (Alexandria Ocasio-Cortez) in New York is a full NIMBY. She has figured out that there are political votes and energy and capital to be gained, and it’s also good policy to be part of a system that builds housing. We are starting to see this in the US but more importantly we are starting to see this in Toronto. The point isn’t to screw Planning, but let’s have the complicated conversations about what’s not working, what is, and how do we fix it?”

As the guys wind down the episode they move into their rapid fire questions and ask “are we in a housing bubble in Ontario?”, “is immigration too high in Canada”, “will Doug Ford win the next election?” and more! Tune in now to Toronto Under Construction! Listen to the episode now!

If you’re looking to get in touch with Stephen visit https://tenblock.ca/