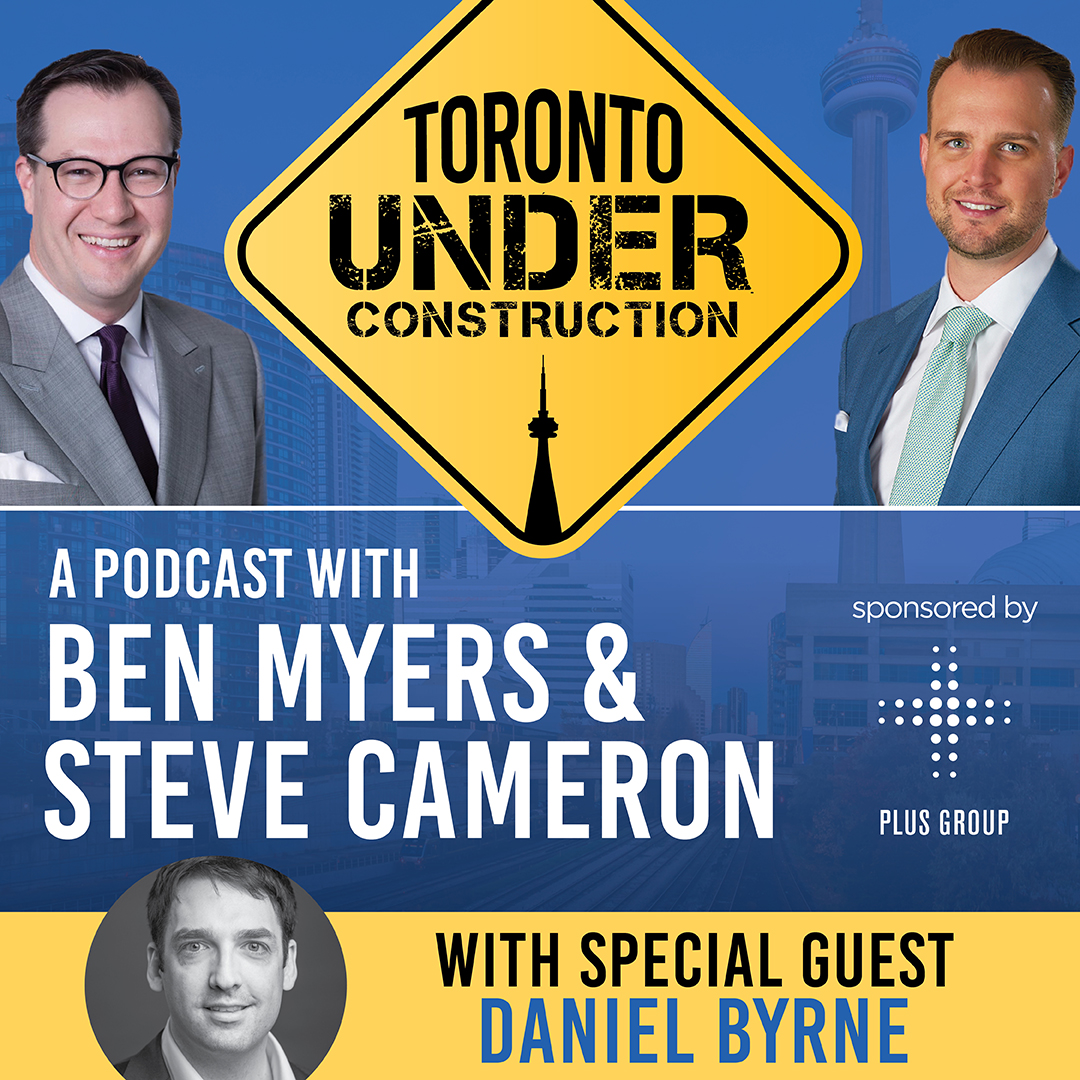 New Season, New Sponsor! If you like the podcast please support those that support the show.

We are excited to announce our brand new sponsor, The Plus Group. The Plus Group comprises 5 distinct companies; RN Design, SRN Architects, Salesfish Sales Software, Coolaid Studios and Studio UNO Interior Design. Their mission is simple: revolutionize the real estate industry through efficiency, innovation and quality, while adding value to the client experience. Learn more about The Plus Group, and any of their 5 companies at ThePlusGroup.ca.

After a short hiatus, we are excited to be back with episode 31 of Toronto Under Construction, with our guest Daniel Byrne, Vice President at main + main. A friend of the show, Daniel calls on a decade of experience with mixed-use development, having directly managed the successful entitlement of over 1.4 million square feet of mixed-use development.

Daniel began his real estate career with a CMHC internship and then took the plunge into real estate consulting after Graduating from Concordia University in 2007 with a Finance degree. Daniel worked with public and private sector clients advising them on how to realize mixed-use projects. In 2012 Daniel was on a panel at a real estate forum and met his current business partner from main + main. Eight months later he left his position to join the company and has been there for the last nine years.

Daniel’s primary role at main + main is focused on the development side of the business, starting with acquisition all the way through to substantial completion. Today, main + main is focused on building Purpose Built Rental projects. Almost all projects are mixed-use developments with a fair bit of retail, and more recently they have shifted their focus more to residential.

main + main is hyper focused on buying high quality urban sites with decades of runway to them. “The upside to building PBR is that you remain exposed to the upside of the location of your real estate for as long as you hold the building. In contrast to condo, when the day you sell your last suite, any revenue upside in the property is going to the people who bought the units and not yourself.”

Daniel goes on to share that main + main is building in three major Ontario markets: Ottawa, Toronto and Montreal, and breaks down the differences he’s seeing in all three markets and how main + main is capitalizing on the benefits of these similar but distinctly different cities.

A Tale of Three Cities

While discussing the three municipalities, the guys touch on the cost per square foot in Montreal versus Toronto and Daniel makes the point that you can still find beautiful condos in great neighbourhoods for less than 1,000 sf in Montreal. The biggest difference between Montreal and Toronto, he says, is that condos are expensive everywhere in Toronto – even in marginal locations. Montreal has a much steeper gradient of pricing, depending on if you’re right downtown, versus if you’re in somewhere that is not as good location-wise.

Steve reflects on how prices are creeping up in all cities in the GTA citing Barrie, Oshawa, Pickering, Niagara, London and Kitchener-Waterloo. “It’s wild to see where prices are going in these secondary markets in comparison to what you’re getting in the downtown core, it’s not that different,” says Steve.

Ben asks Daniel about main + main’s new partnership with Equiton, in Ottawa and asks him to share more details on this 4 acre site located on the river in Vanier (pictured below). This three tower, multi-phrase project has just over 1,000 units, and Daniel is hoping to break ground on the first phase this summer. Daniel shares a few details on the rental market in Ottawa saying they are expecting very high two’s per-square-foot. Daniel shares his goals for this project, which is to provide a higher spec building than the competition, in the hopes of getting a rent premium on the units.

Ben reflects on how Ottawa is an interesting market, citing a few years ago when Toronto investors were buying in a lot of projects in Ottawa, but mentions that the condo market didn’t end up taking off, leaving a big opportunity for rental product. Daniel agrees, stating that condo development went sideways for enough years that it broke the investor psychology around buying pre-construction condos in Ottawa. Pre-con didn’t take off like it did in Toronto, so people moved on.

The guys continue to discuss the three markets and their economic differences and similarities.

Steve transitions the conversation back to Toronto asking Daniel about a few sites they sold to other developers. “Back in 2013 we were doing a lot of land assembly in Toronto, and the expectation was that we would be building some stuff and selling others.” Daniel explains that they ended up shifting a big chunk of the portfolio, but did keep some of the bigger projects like the MEC site on King Street West, which is a AAA site they are developing with Plaza Corp.

The guys discuss a few other projects such as main + main’s Kipling Project and how COVID has affected the rental market in Toronto. “There’s been a big shift in leasing velocity,” says Daniel.

A hot topic in the Toronto development industry right now is inclusionary zoning, and Steve mentions how we’re expecting it to come in September of this year. He mentions that we are seeing an influx of development applications to avoid the affordability requirements, and asks Daniel “do you expect areas such as yours to be affected by inclusionary zoning and slow down the pace or will it not have such a significant impact on your business?”

Daniel mentions that things can fall apart very quickly if he inputs even a fraction of the inclusionary zoning requirements into any of the pricing models they are doing as PBR developers.

“Deals have been on the edge for a while…Land is going to price down to absorb the cost of doing so and if you talk to most people in the business, they will say Toronto land holders tend to be patient folks, and tend to only come off the sidelines for numbers that set a high water mark.” Daniel continues “I think development will slow to a supply-demand balance pushing revenue up on the projects to a point that they can absorb the inclusionary zoning requirements.”

The next topic the guys tackle is Luxury Real Estate, main + main’s project on St. Clair and Avenue Road (pictured below), and the noise the building is making with NIMBY’s in the neighbourhood.

The conversation moves to a discussion on interest rate growth, and Daniel discusses the economics of asset growth, income growth and cap rates.

Daniel shares his thoughts on supply and demand and discusses the economics of the Toronto market. “When there’s no supply, the pricing gets set by the most optimistic buyer.”

Ben points out that many speculators are saying pricing is being pushed up by investors, but that a lack of supply leads to these type of bubble conditions, because people are making irrational purchasing decisions. Ben cites a recent report put out by Ryerson grad students about the loss of housing supply and loss of affordability.

Daniel shares his thoughts on supply and demand and discusses quality trades, and their impact on development, more specifically on the cost of mid-rise buildings.

The guys wrap up the episode with their rapid fire question and answer, asking Daniel questions like “Will banning foreign buyers do anything for affordability?”, “Do you think that there will be a point where we are building more rental buildings than condo buildings?”, “How worried are you about affordability as a result of increasing construction costs?”, and “Is Scarborough the next Etobicoke?” All this and more in episode 31 of Toronto Under Construction.

If you’re looking to get in touch with Daniel visit https://mainandmain.ca.

Listen to the episode now!